As the ailing Richard Baxter waited in the dock, physically propped up by his friends, during his trial for sedition in 1685, he was excoriated by his judge, the notorious Lord Chief Justice Jeffreys:

Richard, thou art an old fellow, and an old knave – thou hast written books enow to load a cart, every one as full of sedition, I might say, of treason, as an egg is full of meat; hadst thou been whipt out of thy writing-trade forty years ago, it had been happy. Thou pretendest to be a preacher of the gospel of peace; as thou hast one foot in the grave, it is time for thee to begin to think what account thou intendest to give.

Though Baxter had spent much of his polemical career in the Restoration rebutting the charge that his nonconformity, and his published defences of it, were ‘seditious’, the accusation that he wrote too much was far harder to counter. Supporters, opponents, even his wife, frequently remarked on his apparent tendency to favour quantity over quality. Baxter himself confessed ‘one blemish’ in his writing, ‘the too oft repeating the same things’, but felt justified in his belief that ‘the modall imperfection of two [Books] was less evil than the total omission of one’. Besides, ‘men may think justly that what is oft repeated dropt not from the Author inconsiderately’, that which is repeated is that which is ‘thought necessary’.

Research by Frederick Powicke and Geoffrey Nuttall, and more recently scholars such as Neil Keeble, Alan Argent and Alison Searle, has however revealed that Baxter wrote far more than he ever published. Scattered across libraries internationally, but chiefly found within the holdings of Dr Williams’s’ Library, London, are sermons, tracts, chapters, legal texts, letters, and other autobiographical fragments which have rarely seen the light of day, and which all form part of the ‘account’ of his life which Baxter intended to give to posterity.

Hence one justification for yet more Baxter – a new, 5 volume, 1.5m word edition of the Reliquiæ Baxterianæ: Or, Mr Richard Baxter’s Narrative of the Most Memorable Passages of his Life and Times from Oxford University Press. By basing its text on Baxter’s autograph manuscript where it is extant, this edition restores to his narrative passages which he chose to delete himself (ranging from 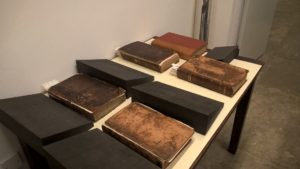 material reviewing his support for Richard Cromwell in the political anarchy of 1659, through to his doorstep purchase of a novelty-shaped mandrake root), and text which his previous editors chose heavily to revise or omit in its entirety (including, again, passages concerning the collapse of Richard Cromwell’s rule, and Baxter’s recollection of a dream in which he stamps several chicks to death). By so doing, it is hoped that this edition will not only contribute to further studies of the historical, ecclesiastical, cultural, and literary contexts in which the Reliquiæ have already become deeply embedded, but also newer disciplines in which they have not so yet readily found a home, particularly in the realms of textual transmission, bibliography and the history of the book.

Informed by the decision to use Baxter’s manuscript as copy text, an important feature distinguishing the new edition is that the huge raft of extra documentation which is interpolated into the 1696 text, disrupting the Baxter’s historical account and often making it difficult to follow, is now presented separately from the narrative manuscript, in volumes III and IV. As well as providing micro-editions of texts such as the Solemn League and Covenant, or Archbishop James Ussher’s ‘Reduction of Episcopacy’, which Baxter directed be included in his ‘Life’, the Oxford University Press edition has also been able to include supplementary biographical documents. Baxter, of course, published no account of his 1685 trial during his lifetime – as well as a detailed eyewitness report of the proceedings, this edition makes accessible for the first time the defence that Baxter would have mounted had Judge Jeffreys allowed it to be presented. It is a startling combination of narrative, defence, apology, justification and polemical insistence that his writings and his actions be interpreted fairly: ‘I will not … repent of serving Christ as well as I was able’. It is, in short, a document which exemplifies the characteristics of the Reliquiæ which this edition seeks to represent.