The Society awards a biennial book prize of £500 to encourage original research on any aspect in the field of Renaissance studies and to recognise significant accomplishments by members of the SRS.

The SRS Book Prize for the year 2022 will be awarded to the author of the best monograph in Renaissance Studies published between 1 January 2020 and 31 December 2021. To be eligible the monograph must be written in English by a current member of the SRS. The prize will be awarded for a book with a topic where the majority of material is within the chronological period 1300–1650. Books about Renaissance history, art, architecture, philosophy, science, technology, medicine, religion, music, the literatures and languages of Europe, and of the countries in contact with Europe during the Renaissance, are eligible. Books will be judged on the following criteria:

The deadline for submitting nominations is 1st February 2022.

Please send three copies of the book you would like to submit to the chair of the book prize committee:

An announcement of the award will be published in the Society’s Bulletin as well as on the SRS website.

The SRS book prize 2020 has been awarded to Hannah Murphy for A New Order of Medicine: The Rise of Physicians in Reformation Nuremberg (University of Pittsburgh Press, 2019). An honourable mention was given to Abigail Brundin, Deborah Howard, & Mary Laven, The Sacred Home in Renaissance Italy (Oxford University Press, 2018). The judges thank the publishers for sending copies of the books: they received over forty book this year and, as ever, the standard was extremely high and underscores the vibrancy of our field. 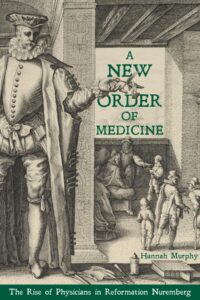 Hannah Murphy’s A New Order of Medicine: The Rise of Physicians in Reformation Nuremberg is an exemplary work of scholarship – of history, of intellectual history, of history of medicine – and a model of outstanding scholarly writing. We are delighted to award it the SRS Book Prize. The title is a little dry, perhaps, but in stark contrast to its contents. Physicians, apothecaries, scholars and their families traverse its pages, as Murphy pursues what she describes as ‘the multiplicity of paths that physicians could take to deal with the challenges provided by medicine … [often] carried out within the confines of Galenism rather than in opposition to it’ (p. 96). Thoroughly researched, meticulously supported with a wealth of primary evidence and secondary sources, its alertness to changes in the social and political spheres as much as the medical is a real strength.

Consistently engaging, concise and incisive, it is full of subtle insight and rigorous analysis, and manages to keep surprising and delighting the reader with the story it has to tell. The judges found it unanimously compelling, engaging and persuasive in its account of changes in medical practice and regulation in a sixteenth-century city of the Holy Roman Empire. 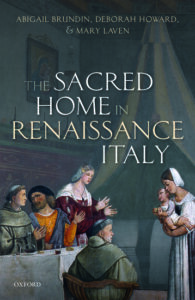 The Sacred Home in Renaissance Italy, co-authored by Abigail Brundin, Deborah Howard and Mary Laven, is a powerful testament to the possibilities of scholarly co-authorship. The rich and comprehensive survey of domestic piety in Renaissance Italy that the authors produce is one that has (and will) have a big impact on the field. The judges were particularly impressed by its successful interweaving of material history, textual history, women’s history, art history (of course) and literary approaches to produce a new and necessary perspective on the everyday practices and values of Italian Renaissance life. Among its strengths are the clarity and resilience of its overall conceptualization and chosen methodologies, the focus on rural as well as urban life, the impressive integration of gender into the primary work of the book without making it a ‘special-interest’ focus. We are very pleased to award it an Honourable Mention in the 2020 Society for Renaissance Studies Book Prize.

The 2018 SRS book prize was awarded to Katherine Ibbett for her Compassion's Edge: Fellow-Feeling and its limits in Early Modern France (University of Pennsylvania Press, 2017). One further book was highly commended, Susanna Berger, The Art of Philosophy: Visual Thinking in Europe from the late Renaissance to the early Enlightenment (Princeton University Press, 2017).

As ever, the judges were impressed by the high standard of the books entered for the prize and choosing a winner was extremely difficult. The judges are very grateful to all the publishers who sent in their books to the committee.

Dr Berger's  book was singled out by all three judges as a visually stunning volume, which considers the interplay between philosophy, ways of thinking and visual representation with lucidity and ambition.   Susanna Berger draws attention to the engraved plural images and tableaux which illustrated philosophical works as expressions of key concepts, as well as the role played by art in the development of ideas, both of which constituted 'visual thinking'.  A wide range of source material is used to great effect - including student lecture notebooks, friendship albums, printed books and broadsides.

Professor Ibbett's book was, however, the unanimous winner because of its brilliant interdisciplinary range and relevance.  Katherine Ibbett provides an illuminating and sophisticated discussion of the meaning and limits of compassion in France between the Edict of Nantes in 1589 and its Revocation in 1685.   She traces the divisions and separations which were invoked by compassion in this original work, which is both reflective and rigorous. She illustrates vividly that compassion was one way in which social dynamics of inclusion and exclusion could be expressed and reinforced.  Through a focus on the feeling, rather than on charitable activities presumed to be motivated by such a sentiment, she provides a new interpretation of how early modern communities negotiated the difficult terrain of toleration and co-existence in the aftermath of Europe's Reformations.  Looking in particular through the lens of gender,  she provides a fresh interpretation of a wide variety of texts (including plays, pamphlets, novels, dictionaries and moral philosophy). This book promises to inspire fresh scholarship in early modern French history, the history of emotions and Renaissance Studies.

The 2016 SRS book prize was awarded to Kate van Orden for her Materialities: Books, Readers and the Chanson in Sixteenth Century Europe (OUP, 2015). One further book was highly commended, Helmer Helmers, The Royalist Republic: Literature, Politics and Religion in the Anglo-Dutch Public Sphere (CUP, 2015).

As ever, the judges were impressed by the high standard of the books entered for the prize and choosing a winner was extremely difficult. The judges are very grateful to all the publishers who sent in their books to the committee.

Dr Helmers's book was singled out by all three judges because of its consideration of mid-seventeenth century Anglo-Dutch politics. Helmer Helmers studies how the continent responded to the Civil War in England and what made the Dutch Republic sympathetic to the royalist cause. This is an unusal an illuminating approach and Helmers offersn insightful analysis through a meticulous attention to a variety of Dutch sources, ranging from engravings, songs, ballads, estate poetry, revenge tragedies todemonology tracts. The breadth and orginiality of the study meant it was worthy of commendation.

Professor van Orden's book was, however, the unanimous winner. All the judges commented with admiration on its interdisciplinary approach to the study of sixteenth century songbooks. The book argues that the bibliographical features of French part songbooks show the sociability at the centre of early modern singing. The chanson culture was a carrier of relationships. Singing part songs at home helped family and friends learn to read texts, music, and at the same time, places in society. Here are printed and manuscript part-books, catechisms, civility handbooks and musicology treatises to let us hear the soundscape of the home. But this is not only a history of relationships, it is also a chance to share the singers’ delight in the world of music. We always read books but we don’t often hear them; the originality of van Orden’s text lies in making us realize that. It is a significant book because it brings together book history and the physical and mental activities of reading music and words. Its argument is supple, its approach scholarly, and its style incisive., showing us how performance shares out the creative process between singers, players and the texts in front of them.

The 2014 SRS book prize was awarded to Alec Ryrie for his book, Being Protestant in Reformation Britain (OUP, 2013). Two other books were highly commended, Guido Alfani, Calamaties and the Economy in Renaissance Italy: The Grand Tour of the Horsemen of the Apocalypse, trans. Christine Calvert (Palgrave, 2013), and Sharon Gregory, Vasari and the Renaissance Print (Ashgate, 2012).

The judges were impressed by the high standard of the books entered for the prize and were extremely grateful to all the many publishers who sent in their books to the committee making the decision of choosing a winner extremely difficult.

Professor Gregory's book was singled out by all three judges because of its comprehensive nature and painstaking research in making available for a wide readership all the prints associated with Giorgio Vasari, and for providing a fascianting commentary that explains why they were so central to his thinking and artisitic practices. The book is the product of many years of serious scholarship and is exactly the sort of work that justifies what academics do in opening up the archive for others to understand and use and which makes being part of the profession a pleasure. The committee also wishes to congratulate the publishers for producing such high quality images.

Professor Alfani's book was chose because it is a comprehensive and stimulating study of the disasters that ravaged Europe in the sixteenth century: death, war, plague, and famine. All the judges agreed that this was a work of admirable ambition, a big ideas book that will inspire readers to further research, and which has a relevance for anyone working on the darker aspects of the Renaissance. The work has a command of an extremely wide range of sources and disciplines, encompassing population history, military history and medical history and is never short of insight into the misery that Europeans experienced throughout the continent in the eraly modern period.

Professor Ryrie's book was, however, the unanimous winner. All the judges commented with admiration on its ability to combine serious ideas and a breadth of vision with meticulous attention to detail. The book asks a simple, central question that is of interest to anyone working in this period: what did it feel like to be a Protestant immediately after the Reformation? From this follow a series of other questions that structure the book: How did you have to change your thinking? What forms of worship did you feel you could adopt? How might you have thought of your Catholic neighbours and your ancestors? What did it feel like to learn that you could talk directly to God without the intervention of the church? How did you read? What was the household in which you lived like? Being Protestant in Reformation England is a long book but it never feels unduly prolix. Its wealth of insights into early modern British life - and, by analogy, European religion - make it a worthy winner of the 2nd. SRS book prize.

Jan van Naaldwijk’s Chronicles of Holland: Continuity and Transformation in the Historical Tradition of Holland during the Early Sixteenth Century, a study of the late medieval historical traditions of Holland and their continuations in the early modern period.