Zibellini are luxury fur pieces made from the pelts of animals belonging to the weasel family, most commonly sables and martens. These objects could be draped over the shoulder, carried in the hand, or worn on the girdle by a chain connected around the neck or to the mouth of the animal. More lavish examples of zibellini feature a jewelled head and paws, often made of gold, but sometimes of silver or crystal. There are very few surviving examples of zibellini today and information regarding their appearance and how they were worn is primarily ascertained from the portraits they feature in, for example,1 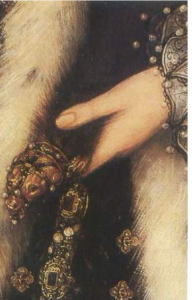 Unlike other fashionable fur items, it is unclear what zibellini were used for in this period, which has led Tawny Sherrill to conclude that they are ‘something of an enigma’.2 At present there are three proposed uses of zibellini: firstly, as part of the commodity culture of the late fifteenth and sixteenth centuries, they were worn to signify the wealth and status of the humans they adorned; secondly, due to the associations between weasels and childbirth, they were used as pregnancy amulets; thirdly, they were employed as ‘flea pelts’, a term coined in the nineteenth century by Wendelin Boeheim who claimed their purpose was to attract fleas away from the body of the wearer onto the fur of the dead animal. While the first two proposed uses are worth considering in greater depth, there are no known references to zibellini as ‘flea pelts’ or ‘flea furs’ in contemporary texts and there does not appear to be any evidence to suggest this was the primary function of the objects.3

This post offers an alternative interpretation of zibellini by adopting a similar approach to Erica Fudge in relation to what she calls ‘animal-made-objects’.4 Within her discussion of commodities made from animal bodies (such as gloves and civet), Fudge states ‘[a]nimals, too often, are bound back, absented from the picture, made to seem unnecessary and inconsequential, with the result that the human emerges as the only necessary and consequential being in the frame.’5

In Edward Topsell’s The Histories of Foure-Footed Beastes, the entries for the marten and sable focus almost exclusively on the profitability of their fur: ‘Martin is the most excellent, for princes and great Nobles are clothed therwith, euery skinne being woorthe a French crowne, or foure shillings at the least.’6 The fur of the sable is described in similar terms: ‘the Garmentes of princes are only fringed and lined with these Sableskinnes, and honourable matrons, auncient Nobel Men and their Wiues does likewise vse two or three of these to weare about their Neckes, for its certain that a garment of these skinnes is much deerer then cloth of Gold.’7 The animals are defined by the wealth they bring hunters and tradesman, and the status they convey for the wearer. Indeed, it is in the inventories of royals and nobles that we find the majority of references to such extravagant pelts.8 For example, in Henry VIII’s 1547 inventory there is listed a ‘sable skinne with a hedde of gold conteineng in it a Clocke with a Coller of gold enamelled blacke set with foure Diamoundes and foure Rubies and with two perles hanging at the Eares and two Rubies in the eyes the same skinne also hauing feete of golde the Clawes thereof being Saphires.’9 These objects are obviously luxury items and the embellishment in some cases is astonishing, for example, see the Jewelled Marten’s Head in the Walters Art Museum collection (Figure 2).

Despite the appearance of zibellini in the King of England’s inventory, it is usually assumed that they were mainly fashionable accessories for women due to a connection between the objects and pregnancy. To begin with, zibellini were often worn on girdles; an appropriate place for pregnancy amulets owing to their association with both marriage and child-bearing.10 The connection between zibellini and pregnancy also arises from a belief that weasels conceived through the ear and gave birth through the mouth, which was recorded in various medieval and renaissance bestiaries that recounted the myth of Galanthis.11 According to this myth, the mortal Alcmena became pregnant as a result of her affair with Jupiter. Juno, Jupiter’s wife, sent the goddess of childbirth Lucina to prevent the child from being born. Lucina sat at Alcemna’s door holding her own knees shut. However, Alcmena’s maidservant Galanthis ruined Lucina’s scheme by announcing the birth of the child. The surprised Lucina let go of her knees, whereupon Alcmena gave birth to Hercules. Out of anger, Lucina turned Galanthis into a weasel, cursing her to give birth through her mouth.

Jacqueline Musacchio has analysed contemporary marital and childbirth practices in light of this myth to argue that zibellini were used to imply or foreshadow pregnancy.12 To support her argument, Musacchio examines Paolo Veronese’s Portrait of Countess Lucia da Porto Thiene with her Daughter Deidamia(see Figure 3). The painting is dated to 1552, when the Countess was pregnant with her daughter Emilia, which is indicated by her large form, loose clothing and the fur pelt draped over her arm. The zibellino painted by Veronese in this portrait bears a close resemblance to the Walters Art Museum metalwork head, which directly alludes to the myth of Galanthis through its large decorated ears and open mouth (see Figure 2). 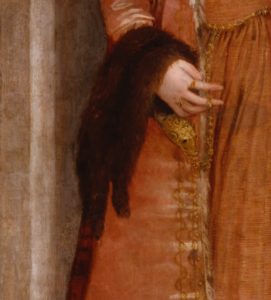 Musacchio makes a convincing argument concerning the connection between weasels and pregnancy in the period, however, she does not acknowledge that zibellini were made from real animals. Unlike the abortive vellum discussed by Fudge in ‘Renaissance Animal Things’, zibellini are not animal-made-objects in which ‘the actual animal’s presence seems to have disappeared’, although this is still ‘overlaid by human culture’.13 For example, the craftsperson of the Jewelled Marten’s Head went to great lengths to create a lifelike object — the mouth opens and closes, the tongue moves, and the natural whiskers of a marten were even inserted into the holes on either side of the snout.14 It is also important to note that zibellini are usually listed in inventories under the names of the animals from which they were made: sables, martens and ermines. Indeed, ‘zibellini’ comes from the Italian for sable, and there are also instances where the term ‘martore’ is used, which is the Italian for marten. The fur pelts do not acquire names that define them as objects and thus distance them from the animal they once were.

Fudge outlines the inherent paradox in wearing animal skins and argues that they mark ‘humans as all-powerful (animals will be killed for them) and simultaneously as all-frail (they need animals to be killed for them)’.15 Unlike gloves and other furs, zibellini were not used for the warmth and protection they provide their human wearer, but for self-adornment. They consequently emphasise human dominion over nature; the animal is hunted, captured, killed and then displayed as an emblem of human prowess. In relation to this, Topsell identifies weasels as worthy opponents to humans; when recounting the story of Galanthis, he is not concerned with the associations between weasels and pregnancy but rather with their cleverness. Topsell observes: ‘although the body of it be very small, yet is the witte and vnderstanding of it very great; for which singular Art and subtilty it compasseth his prey, whereupon there lyeth this history of Galanthis the maide of Alckmena.’16 He also outlines their viciousness and ability to escape capture, as sables are said to ‘bite most ireful, for their teeth are as sharp as Razors, and there is no beast in the World of their quantity so angry and terrible as they are.’17 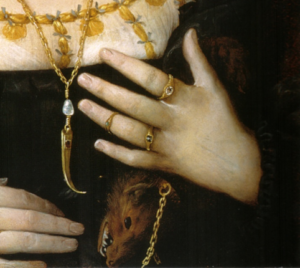 The vicious appearance of the zibellino in Lorenzo Lotto’s portrait of Lucina Brembati, in which its razor-sharp teeth are clearly visible, seems to demonstrate the weasel’s allegedly untameable nature (see Figure 4).18 This particular animal, however, has been subjected to the ultimate taming; it has been killed and turned into an accessory. The animal’s objectification is further accentuated by the zibellino, which has a gold chain attached to a collar around its neck, being firmly held under the sitter’s hand, completely in her control. This portrait arguably provides a representation of zibellini being chained to girdles as a symbol of domestication and human superiority.

I suspect that Fudge would resist this reading, as she argues ‘[a]nimal skin is […] much more than simply a product and thence illustration of human dominion […] the wearing of pelts becomes necessary for humans, and in this being necessary the non-human becomes dangerously potent.’19 I agree with this assessment and would argue that it still applies to zibellini, as the inclusion of fur pelts in early modern portraiture may also act as a reminder of the mortality of humans.

When describing the appearance of fur pelts in fifteenth- and sixteenth-century portraiture, Musacchio states ‘the limp body of the lifeless animal plays a prominent role’.20 By extending her reading, we might wonder whether the representation of zibellini in portraits reminded observers of the dangers of child-bearing in the early modern period, especially when we consider the significant number of women and infants who died during pregnancy and childbirth.21 Beatrice d’Este was one such woman, as she died following the stillbirth of her third son in 1497, at the age of 21. Following her death, Beatrice’s husband, Lodovico Sforza, commissioned a tomb monument for himself and his wife in which Beatrice is featured with a fur pelt draped over her clasped hands (see Figure 5).22 If the zibellino depicted here represents the cause of Beatrice’s death, it consequently acts as a reminder of the inherent risks of pregnancy. Zibellini may therefore be used to symbolise the ultimate fragility of the human — the weakness they share with animals — the inevitability of death.

Although the reading I have offered of zibellini will not neatly apply to every example from the early modern period, this post has given an account in which the animals from which these objects were made are put back into the frame and given an agency of their own.

This blog post was written by Nicole Mennell, PhD candidate at the University of Sussex. It originally appeared on Sussex’s Centre for Early Modern and Medieval Studies’ website.

1Karen Hearn identifies the zibellino in this portrait as a ‘flea cravat’ or ‘tippet’, and suggests it was ‘intended to attract the offending vermin.’ See Karen Hearn (ed.), Dynasties: Painting in Tudor and Jacobean England 1530-1630 (London: Tate Gallery, 1995), p. 95.

18 Musacchio also analyses this portrait and suggests that it plays upon the woman’s name and its associations with the goddess of childbirth, p. 182.