August 18, 2012
By Student Volunteers from the University of Manchester

Some of the student volunteers from the University of Manchester have contributed some comments on their experiences of the conference:

Rosie Rees-Bann (MA student): On the Chetham’s Library Tour we were introduced to the history of the library and its beginnings as a charitable venture by Humphrey Chetham. We were then taken to the reading room and introduced to a sample of the collections. This included Ben Jonson’s copy of Plato, a polyglot Bible and Henry VIII’s copy of Prosper of Aquitaine. We were then shown the Chetham’s small printing press and given a demonstration of how it works. The tour was extremely enjoyable and I think it reflects the wealth of resources that Manchester has to offer.

I particularly enjoyed the panel on Middleton that took place on the first day. There was a good discussion at the end of the papers that was very stimulating. I also found the workshop on education very interesting. The focus of the workshop was trying to work out ways of strengthening the links between schools and universities. Having a panel like this alongside others with a more literary focus demonstrates the breath of research that was being discussed at the conference. 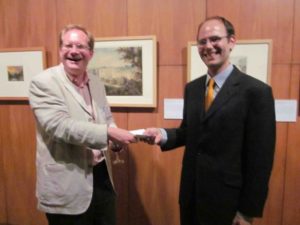 Annie Dickinson (BA Student): As I am currently studying for an undergraduate degree I had not until the 2012 SRS conference had the opportunity to attend an academic conference, and I found it very exciting to have the opportunity to hear first-hand the newest research on the Renaissance period. I specialise in English literature, and from a literature perspective there were many enjoyable papers, a highlight being the panel on Early Modern Friendship. Amritesh Singh’s paper, ‘“Twinned lambs that did frisk i’th’sun”: Marriage, Adultery, and Queer Friendships’ was particularly interesting, and raised ideas that I believe will be useful with regard to work on Early Modern identity and selfhood that I plan to undertake in the final year of my degree. However what really grabbed my attention was the array of subjects on offer; I was able to attend sessions on areas as diverse as cartography, art history, and translation. Alan Stewart’s final plenary on ‘The Strange Friendship of Edward and Gaveston’ I think summed up the interdisciplinary nature of the conference, demonstrating the interconnectedness of history, politics and literature. 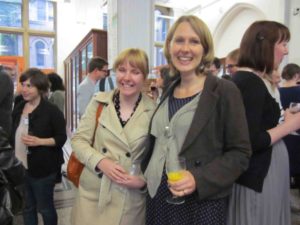 Katie Nicholas (BA student): During the SRS conference 2012 I attended several sessions including a discussion of Thomas Nashe and heard a paper on ‘The Genius of Shakespeare’ which was particularly relevant having just finished a course about the language of Shakespeare and the adaptation of his works. This was my first experience of an academic conference and I really enjoyed it, meeting new people and hearing papers from all over the world from leaders in their fields. A personal highlight was a tour of the John Rylands University Library on Deansgate. I loved the possibility to look at several books from their vast collection in such beautiful surroundings. Of particular interest were several books from the Crawford Collection as they were sourced from the Earl of Crawford’s library in my hometown, Wigan. The conference was well organised and has encouraged me to visit future conferences both for academic and social reasons. It gave me the opportunity to make new friends with other girls from my course whom I look forward to catching up with as I enter my 3rd and final year at the University of Manchester.

Mike Collier (MA student): All the sessions were well attended and the level of engagement in the sessions was excellent, generating much debate both with members of the panel as well as among the audience themselves. The keynote speakers were also excellent, both entertaining as well as informative. 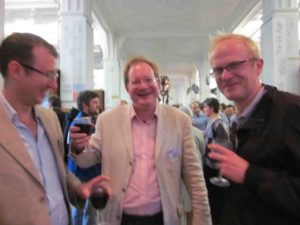 Michele Collier (MA student): My conference experience ended on a high note. In a seminar that I had expected to be less than full, as it was the last of the conference and trains were beckoning, I found myself looking after a room that was filled to bursting, with latecomers accommodated on the floor and in the doorway. Given that Peter Mack was presenting I perhaps should have expected that this would be the case, and in what were shortened versions of the original papers (it had only been realised that morning that the length of time available for the session was one hour instead of the usual hour and a half) he entertained hugely with his paper on the emotions in Cavalcanti’s La Retorica, as did Emmanuelle Lacore-Martin in her discussion of the anatomy of emotion in Rabelais.

It was however the final paper that was a brilliant end to the day and the conference, and which was entitled ‘Playing on Emotions in Early Modern Public Executions’. Presented with wit and style by Una McIlvenna, the paper was interspersed by Una’s delivering, in a lovely Irish lilt, her rendition of each ballad to its original tune, prior to giving her insights on the use and reception of each of the works.